Gen 2 Surf System, or Surf Gate? – Here’s a Study to Help you Decide.

Do you have questions about surf systems, how they work, and which one is truly a smarter purchase? Let us answer these questions for you with unbiased FACTS. In an independent study, research was done on the two most popular wake surf systems on the market, the MasterCraft Gen 2 Surf System vs Malibu Surf Gate. The results speak for themselves as to which system is a better buy.

Jim is a senior consulting, product development and R&D professional with more than 30 years of experience in the transportation industry in Europe and the US. Jim has served on Technical Advisory Boards and his skills in new product creation have been recognized with the award of more than 20 US patents.

Steve is the President of SeaSystems Research LLC and also the Associate Director of the University of Michigan Marine Hydrodynamics Laboratory.

Three boats from both MasterCraft and Malibu were tested against each other, each being paired to the boat that closely resembled its size. Each boat was equipped with their brand’s surf system – MasterCraft with a Gen 2 Surf System and Malibu with Surf Gate.

The boats were loaded with factory ballast according to the manufacturers recommended settings and adjusted for surfing on port and starboard sides. Using a combination of cameras, floating markers, and sensors, data points on wake size and length were collected.

Measurements were taken to see how long it took to switch the surf wave from one side to another. The ease of switching surf wave sides is a convenience for those in the boat.

User interface was evaluated to determine how easy it was to set up the boat fro wake surfing. Each boat comes with its own unique set-up procedure and control system that lets the consumer set the boat up for wake surfing. The easier the controls, the better the system is for control.

The steering handling of each boat was also evaluated while surfing. When the driver is at surf speed and switch from creating a surf on the other side, the boat changes direction. Measurements were taken for the amount of steering wheel correction needed. 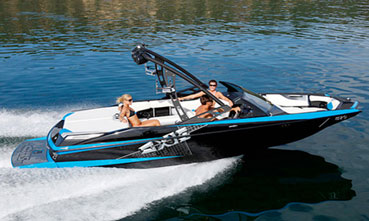 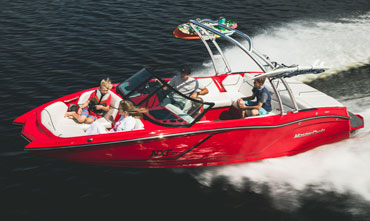 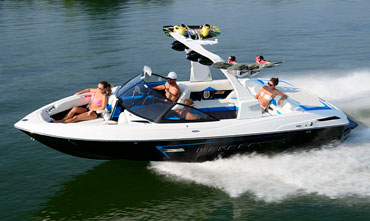 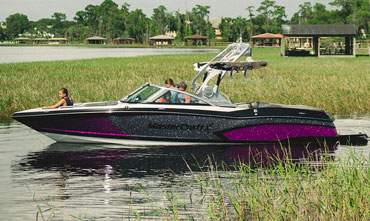 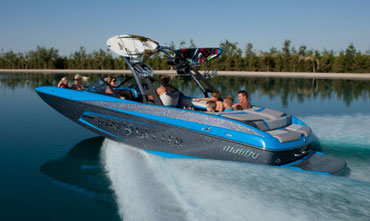 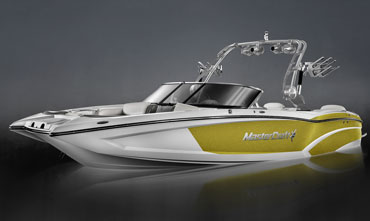 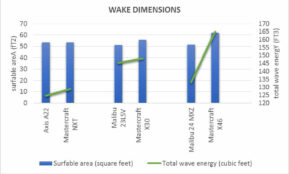 All 6 boats tested produced long wakes allowing amateur surfers to surf as much as 18 feet back from the boat. The results show that wake length is not a big differentiator between Surf Gate and Gen 2 since all boats product surfable length within 2 feet of one another. On the other hand,the push coming from the height and width of the wakes gave the advantage to Gen 2 in all 3 boat size classes. 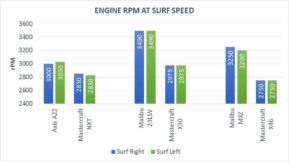 The engine speeds followed the same pattern as the fuel consumption. That is, the boats equipped with the Surf Gate all needed higher crankshaft rotation speeds to maintain surf speed compared to the Gen 2 equipped benchmark boats.

Within each size class, the boats with higher engine speeds were less fuel efficient and noisier inside than their comparators. 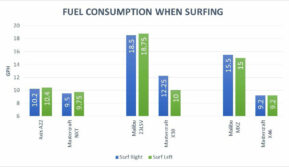 The impact on fuel consumption resulting from deployment of the surf systems was quite different when comparing the 2 systems. The MasterCraft Gen 2 system actually caused fuel consumption to decrease by approximately 10% when the system was deployed at surf speed. In contrast the Surf Gate system deployment (tabs and wedge) resulted in an increase to fuel consumption

Based on the results above and assuming 100 hours of surfing per year and gas price of $3.50 per gallon the comparison looks as follows: 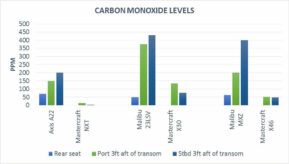 All boats measured 0 parts per million (PPM) at the driver’s seat and so these readings are not tabulated. In the rear seat location, there was no measured accumulation of CO in the Mastercraft boats. The Malibu boats, however had measured accumulations averaging more than 50 PPM. Measurements taken 3 feet aft of the transom produced the highest readings for all boats with the Malibu boats averaging 343 PPM and the Mastercraft boats averaging 42 PPM.

With surf systems deployed and averaging measurements from the 3 sampling zones: 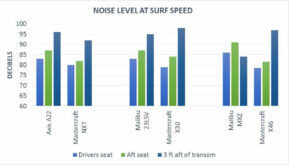 All boats had comfortably low sound levels at the driver and rear seat zones. In these locations the measurements for the Gen 2 equipped Mastercraft boats were between 1 to 3 dB lower than the Surf Gate equipped boats. As expected, all boats had higher noise reading immediately behind the boats with the NXT quieter that the Axis 22 and the Malibu 23LSV and 24MXZ quieter than their respective Gen 2 equipped Mastercraft boats.

The Mastercraft NXT was quieter than the Axis 22 in all 3 sound measurement zones. The other 2 Mastercraft boats were quieter inside and noisier outside than their respective Malibu benchmarks.

• Mastercraft X30 operated at an average of 1.33 Db lower noise level than the Malibu 23 LSV

• Mastercraft X46 operated at an average of 1.33 Db lower noise level than the Malibu 24 MXZ 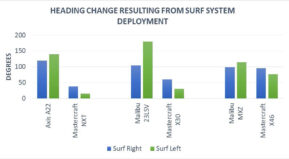 The boats with Surf Gate required greater steering wheel angle rotation in all 3 boat size classes. In 5 of the 6 boats tested, the steering wheel effort needed to correct the heading change was relatively effortless 3lbs or less. The outlier in the force testing was the Malibu 23LSV that required 14lbs to bring the boat back on course.

In terms of perceived effort, the wheel rotation force is judged to be more important than the actual angle of wheel rotation. Consequently, the force required to counteract the Surf Gate deployment on the Malibu 23LSV is a negative.

Both 20-foot boats exhibited more bow rise than the longer boats with the Axis pitching 11.8 degrees compared to 11.6 for the Mastercraft NXT.

The 23-foot boats exhibited identical pitch at 10.2 degrees and the Mastercraft X46 had the lowest reading of 7.7 degrees.

The bow rise that resulted from acceleration to surf speed was within 2 degrees on 5 out of 6 of the boats. The Mastercraft X46 rode considerably flatter at 7.7 degrees of pitch. Forward vision was accommodated with the use of bolster seats on 5 out 6 of the boats. The Axis 22 test boat however, did not have a bolster seat and so the driver had to stand in order to get a clear view forward. 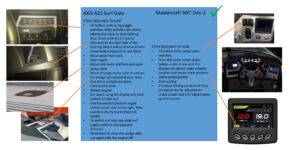 The 23 and 24-foot class comparison resulted in very similar number of steps. The surf control systems for all 4 of these boats were easy to comprehend and operate. The major difference in ease of use was in the 20-foot comparison between the Axis 22 and the Mastercraft NXT, the MasterCraft system being easier to use. View picture for details. 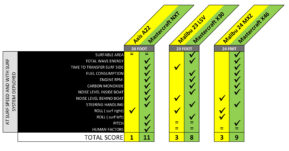 This chart summarizes how the MasterCraft Gen 2 and the Malibu Surf Gate systems stack up relative to one another in each of the boat size categories. The comprehensiveness of the study and the range of performance measurements accumulated over several days of testing should be sufficient to answer all questions consumers may have relative to the performance of these systems.

WANT TO SEE FOR YOURSELF?

Below is the video presentation of the study narrated by Jim Dowd and Dr. Steve Zalek. To read the study, click below.